MX Player is an Indian Video streaming and video on demand provider which offers streaming New and original web series along with urban regional shows in English, Hindi, Telugu, Kannada, Tamil, Malayalam, Bengali, Marathi, Punjabi and other regional languages. Check out below for the Upcoming webseries and shows on MX Player. The Content is provided both on Mobile Apps and Website and has two versions Mx Player with Ads and MX Gold Plan.

Below Web Series list is sorted by descending order date. You can see the Web series name, language, and available date along with the link. 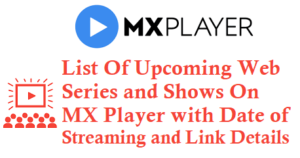 Using MX Player MX Gold Annual Plan you can watch Ad-free streaming of Web Series and Top Movies along with you Get early access to new releases on MxPlayer.

Currently MX Player has 1 Membership Plan which is MX Gold Annual and costs Rs 199 for 12 months.

Note: We will continue to update this post List Of Upcoming Web Series On MX Player whenver a new webseries or a show is announced on MX Player Video OTT Platform.