RRR Movie Digital Rights is acquired by Zee5 for a whopping Rs 325 Crores which includes Both Digital and Satellite Rights.

RRR Digital Streaming Rights Bagged by ZEE5 and these rights are for all languages PAN India.

RRR Movie OTT Release Date is 20th May 2022 and will stream online on ZEE5 Platform. #RRR Will be available on ZEE5 OTT platform only after 90 days of its theatrical release which is 25th March 2022. RRR Hindi premiering on Netflix on 20th May 2022.

Satellite Rights for Movie RRR is acquired by Zee5.

RRR movie satellite rights are acquired by Star TV Channel for Telugu, Kannada and Tamil and Asianet Channel for Malayalam and Zee Cinema for Hindi Language. 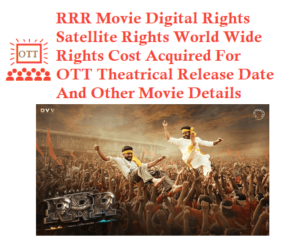 Watch the Trailer of RRR in Telugu Language.

RRR is nothing but the abbreviation for Rise, Roar, Revolt.