Shamshera is an Indian Hindi language period action drama movie directed by Karan Malhotra, Starring Ranbir Kapoor, Sanjay Dutt, Vaani Kapoor in lead roles and Produced by Aditya Chopra. Shamshera’s story is about a dacoit tribe who took charge in fight for their rights and independence against the British in 1800’s.

Satellite Rights for Movie Shamshera is acquired by Star. 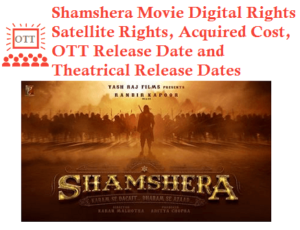 The Theatrical Release Date of Shamshera Movie is 22nd July 2022.

Meaning of Shamshera is Sword, in Telugu it is కత్తి Katti