Thalaivi movie story is about the life of J. Jayalalithaa, who is a politician and film actress who served six times as the Chief Minister of Tamil Nadu, Thalaivi movie will release in 3 Indian languages Telugu, Hindi and Tamil.

Thalaivi Movie OTT Release Date for Hindi is 25th September 2021 and will stream online on Netflix, for Telugu and Tamil Audios will premiere on Amazon Prime in October 2021. Check the Thalaivi Movie Online Streaming Link Below.

Satellite Rights for Movie Thalaivi is acquired by Zee Telugu and movie will stream on Zee Telugu TV Channel. 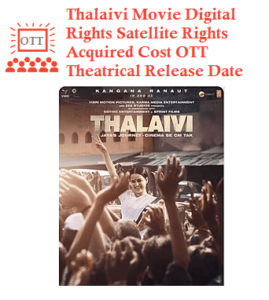 The Theatrical Release Date of Thalaivi Movie is 10th September 2021.

Meaning of Thalaivi is Leader.